(Page will be updated monthly as we spotlight the other nominees.)

Meet the seven BGC San Dieguito teens (age 14-18) who have been nominated as a candidate for our 2020 Youth of the Year Award. These seven teens exemplify the positive impact that BGC SanDieguito has on our youth. 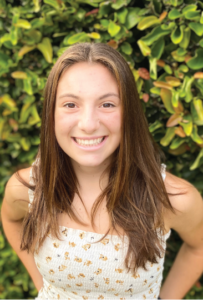 For the past nine years, Quinn’s evolution from BGC San Dieguito’s Snuffy Basketball to Bulldogs Basketball has resulted in a depth of character, strength and resilience far beyond her age.

Her teammates and coaches know her as a confident and reliable leader who has demonstrated her strength and resilience first hand. Her ability to overcome getting cut from her 6th grade youth team to becoming a leader on and off the floor the past few years has been impressive. In most cases when a young girl is cut from a team, she quits and finds a new sport to play. In some cases young girls quit sports all together when having to face failure within a sport. Girls drop out of sports at 1.5 times the rate that boys do by age 14.

Not only did Quinn come back the next season and make a team, but she has also committed to getting better with each season that passes. Her commitment, confidence and courage has earned her the respect of her peers.

To quote Quinn’s own words, “I believe perseverance requires some element of courage and I’m learning that perseverance is not just the act of pushing through despite obstacles. It also requires staying positive, motivated, and maintaining your passion for the things you are doing in order to find success. Just because something might seem overwhelmingly difficult, it doesn’t mean you can’t do it or that it’s not worth doing. Perseverance is also putting yourself out there despite the fear of failure and despite the knowledge of how hard the challenge is before you.”

“Not having access to The Club and the community of people that make up Bulldogs Basketball during this health crisis, has really made me realize what an important role it plays in my life. All the experiences I’ve had in those gyms with my family and friends, with Coach Courtney, and with my team. All the moments and life lessons that I’ve learned are shaping who I am becoming and how my goals and mindset are changing…the Boys & Girls Club experience has taken me from the 6-year-old Quinn who didn’t want the ball in her hands at all, to the 15-year-old me, where I can put myself out there in sports and in the world and say,“I want the ball!” 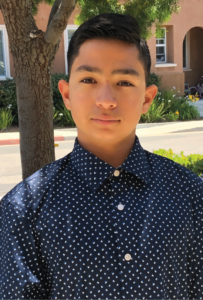 Sean has always been one to stand out due to his leadership, initiative and excellent work ethic. For the last 6 years Sean’s participation in our After School Programs, Summer Adventure Camps as both a camper and volunteer, and Youth Arts Academy private music lessons, has given Sean an understanding of the various ways The Club impacts young people. As a high schooler, Sean continues to attend The Club when so many of our youth fall off. As an older member of the program, Sean’s ability to relate to members of all ages is astonishing. He considers all the Club Kids friends despite their ages. His desire to engage in activities and converse with everyone encourages those around him to be more active and present.

“My first experience going to The Club, I remember being scared because it was something new. But the moment I stepped into the door it was like paradise. There was air hockey tables, gaming systems, basketball courts, wall ball courts and more! All the people were welcoming, and I felt safe. I remember, hours later my mom came to pick me up and I tried to bargain with her to stay just a little longer. The next day, I was counting down the hours until school ended, as I knew that’s when the BGC van would pick me up. The anticipation of that van always put me in the best mood…” 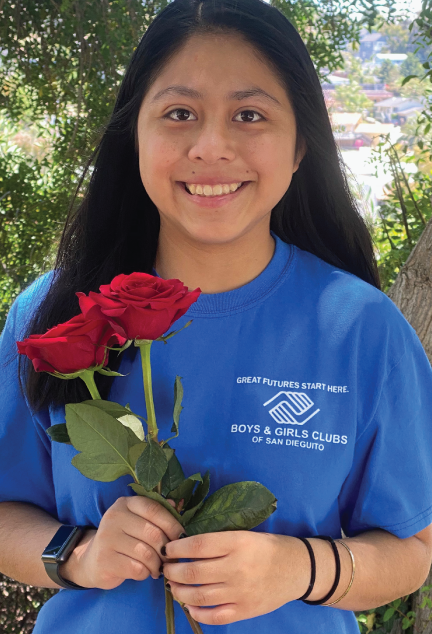 Maribel is a truly inspiring individual. She is an honest, dependable, and an incredibly hard-working member of Boys & Girls Club San Dieguito. Maribel has always stepped up when The Club needed her. For the past ten years, her volunteer work with countless fundraisers and events, along with anything the staff may need help with has been invaluable.

“Just being around her makes you want to do better!” says Bosque Leanio, Harper Clubhouse Manager.

“Maribel has always been an absolute joy in our Clubs. As our members get older we often see their involvement with the club decline and/or their willingness to participate drop. This is certainly not the case for Maribel. Her consistent involvement and keen curiosity fosters positive discussions and bring the best out of BGC employees and members.”

“The Club always made me feel like I was smart because they took the time to help me understand things that I was unsure about. They have wonderful volunteers that helped me, especially… in math. In the seventh grade, I was failing math class and (a volunteer) stayed by my side and gave me notes that helped me understand better. Thanks to her I was able to get all A’s in math, even up to my junior year of high school. Math has become my favorite subject. The Club is a second home to me. It was and will always be there for me when I need them while my parents are working. Thanks to the Club I am an advanced swimmer, they helped me find my dream college, University of San Diego, and introduced me to my friends.” 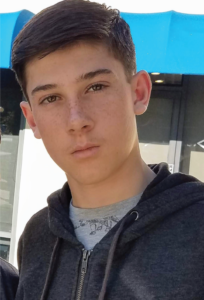 Riley Riggs is a two year veteran of our Griset Clubhouse in Encinitas and an integral member of our teen volunteer program, Keystone Club. Riley’s quiet and observant nature tempered with his wit, optimism and respect for his peers and our BGG Staff makes him a leader in so many ways.

Riley finds himself making a difference within and outside our Club walls through Keystone (a Boys & Girls Club Teen Service Program). He understands the importance of serving others and volunteering in our community. Riley credits BGC San Dieguito for allowing him to open up and become more social and outgoing. As a chaperone at our sixth-grade dances, you may even catch Riley bustin’ a move when he thinks no is watching!

“The reason that this (BGC San Dieguito) was different from the last after-school program that I went to was because of the great community. I knew almost no one who went there but the welcoming staff encouraged me to start making new friends and eventually join the Keystone Club which really made me change as a person by helping me become more social and more engaged with the local community.” – Riley Riggs 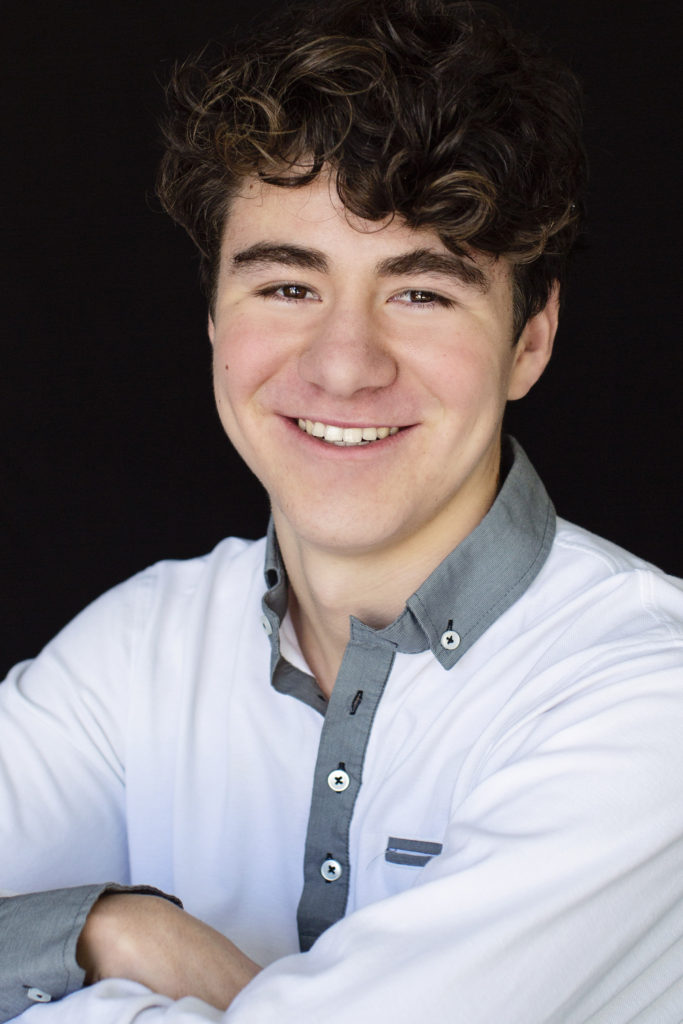 Drew Schafer is a senior at Canyon Crest Academy and nine-year veteran of our Rancho San Dieguito Swim Team. Drew was nominated by Coach Armani from our Aquatics program for the meaningful impact he has both inside and outside of the team.

“Drew is the ultimate athlete when it comes to what coaches look for. He’s a leader, a hard worker, is goal-oriented, and can be counted on to lead by example. Even more so, what makes Drew stand out is his ability to communicate those values and standards to not only teammates his age but younger swimmers throughout our organization.” Armani Kobik, Rancho San Dieguito Lead Coach & Team Administrator

On top of being a full-time student-athlete, and involved in several Canyon Crest Academy organizations, like the drug prevention club, Drew spends his time on the weekends teaching swim lessons for our Club’s Aquatics Program to kids of all ages.

“The aquatics facility has served as a second home to me for years, where I work as a swim instructor and where I swim for 3 hours 6 days per week. The Club, and all the relations I made, helped build some of my finest qualities that have shaped me into the person I am today.”  – Drew Schafer 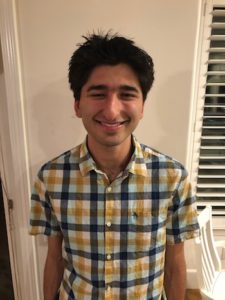 John is a current student of Monday Night Jazz Band and has been studying music at our Youth Arts Academy for the last 8 years.

When John was young, he wouldn’t get too frustrated by musical challenges. He would usually smile, laugh it off, and practice until he had the skill mastered. He still brings that same great attitude and sense of humor to jazz band each week. Now that he is one of the older students in the class, he has shown to be an amazing leader. He sets a great example with his musicianship, his positive attitude and great sense of humor. He is always ready and available to help whenever needed. He is smart, responsible, and polite, and will no doubt continue to inspire others through his example in the future.

“
My experience of music has always revolved around a single place: the Youth Arts Academy (YAA) at Boys & Girls Clubs of San Dieguito. My exploration of the saxophone first began there, nearly a decade ago. The notion of playing with others was, at the time, just as intimidating as the solos I would later come across.

Reflecting on my years at YAA, I’m struck not only by their longevity, but by what I’ve accomplished within their span: the fears I’ve overcome, the music I’ve played, the friends I’ve made. I stumbled upon a space where fear, meanness, and all the worst qualities of the human character are left at the door; replaced with integrity, kindness, and friendship unmatched in any of the other pursuits I’ve had in life.”  – John Aste 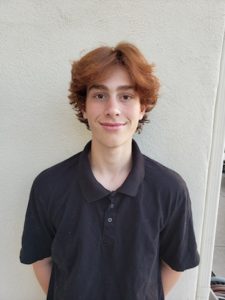 Jesse has had a tremendous impact on Boys & Girls Clubs of San Dieguito throughout his years of participation and his ongoing commitment to mentoring younger athletes. Volunteering over 200 hours, Jesse has given back to the community by coaching elementary teams, speaking on behalf of the Club, providing basketball clinics to younger members, and initiating fundraising ideas.

Jesse stands head and shoulders over most, not only in demonstrated initiative, intelligence and creativity, but also in his ability to function as a productive member of a team. His excellent communication skills, positive outlook and pleasing personality enhance his natural leadership qualities. His willingness to accept challenges and listen to input enable him to contribute thoughtful, well-reasoned approaches to helping others solve difficult problems.

“
I have gone from an overweight and inexperienced eight year old who knew next to nothing about basketball to a coach and mentor for other up and coming players.

If I were to calculate the hours per week and weeks per year that I’ve spent with BGC San Dieguito, the numbers would be comparable to those hours that I spend in school and with my family. There’s no accurate way of really placing a value on this other than to say that The Club and the people I’ve known have all been powerfully influential on my upbringing. Many of these people are like extended family to me, and our common bond is The Club and our love of sports…if I’m asked how to get kids involved in sports and allow them to flourish, my recommendation is always Boys & Girls Clubs of San Dieguito.”  – Jesse Snider

Learn more about our Youth of the Year Celebration here.