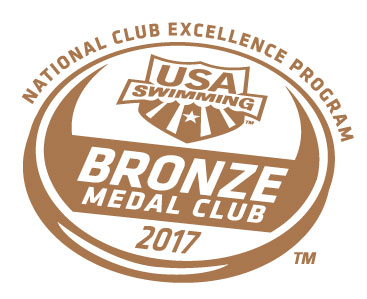 In its 16th year, the Club Excellence program identifies clubs that execute strong, well-rounded programs to produce elite 18-and-under athletes. The top 20 clubs earn Gold level ranking and those rated 21-100 are designated as Silver honorees. The next 100 clubs are recognized at the Bronze level.

For the sixth year in a row RSD Swim Team has again been recognized as one of the top ranking team in the nation. This year RSD earned the bronze title in the USA Swimming Club Excellence program, recognizing high-performing teams Nationwide in the development of athletes 18 years and younger. Only 200 Teams are recognized in the US for titles based on athlete development. RSD holds the honor as the top ranked team in San Diego-Imperial swimming!

“Earning a Gold, Silver, or Bronze ranking is a reflection of the hard work and time invested by athletes and coaches and has become a highly coveted honor for our teams. Each year, the competition to earn a Club Excellence ranking continues to be more and more challenging.” said Pat Hogan, USA Swimming’s Club Development Managing Director. ” On behalf of USA Swimming, I want to congratulate each of the 200 clubs that have earned a ranking in the 2017 program.”

Joe Benjamin, RSD Head Coach said “I’m proud of our team for the hard work and consistent effort earning them this title. As a one-facility team, we may be limited in how large our team can grow, however, I have seen this team consistently hold itself to high standards of quality that are important to us all. This title shows the excellence of our efforts in that commitment to quality parenting and coaching, strong core values, and consistency in the field. This team proves that great futures really do start with the Boys and Girls Clubs.”